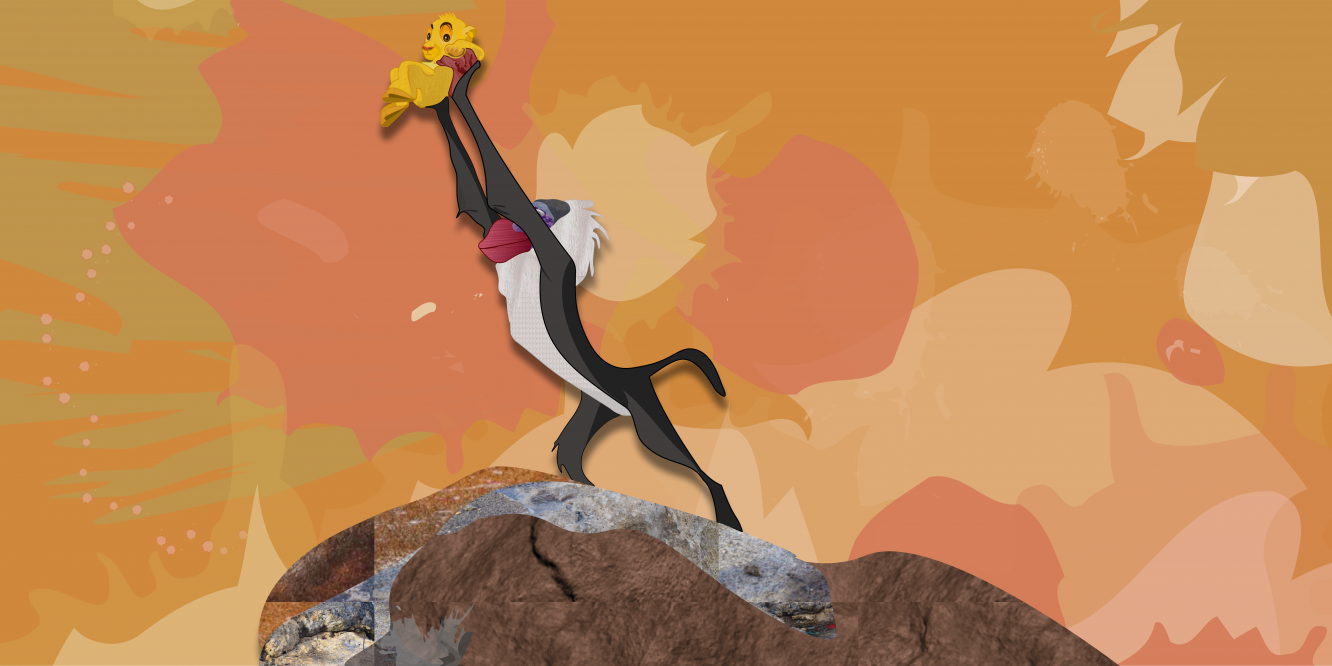 Released one-year post South Africa’s apartheid in 1994, Disney’s The Lion King held a lot of promise. But the controversies that soon followed is a reflection of how power, used irrationally, can cripple the voices of the many who came before us. So, here is a few things to ponder before, during and after if you choose to watch the 2019 live action remake.

I wasn’t even born when the animated Lion King came out in 1994, but its depiction of crucial life lessons spanning death, responsibility, love and pain, has made it resonate as a multi-generational favourite worldwide. The would-be king, a young Simba, is faced with the consequences of his adolescent recklessness and undergoes a journey of a lifetime across the African plains that eventually brings him back to where he’s supposed to be.

Advertised by Disney as its first animated film presenting a completely original storyline, it held a lot of promise. At its time of release, South Africa was in its first year post-Apartheid, and still felt all the grievance of half a century worth of violent institutionalised racial segregation. This relevance is key, as some people have been misguided into thinking Disney actually created the term “Hakuna Matata”, which is in fact the Swahili phrase for “there are no troubles” and popularised in English by Disney as “no worries”.

But that’s really as far as the authenticity goes.

Disney seemingly forgot they didn’t create “Hakuna Matata” as they filed to trademark it in 1994 under the registration number 27006605 when the original movie first came out, and were successful in doing so in time for the live-action remake.

Although it is apparently only limited to use of the phrase in relation to Disney merchandise and their intellectual property, it rightfully sparks outrage and garnered over 190,000 signatures in a Change.org petition started by Zimbabwean activist Shelton Mpala. It is scary to think whether the team behind a multibillion media industry is honestly that dense or they genuinely believed their influence was greater than the 82 million people who speak the approx. 2000-year-old language.

But the caucasity doesn’t stop there. Disney’s claims that the Lion King was an original storyline is thwarted by critics and fans who see a strong comparison to the Japanese manga King of the Jungle, created by Osamu Tezuka in 1950. Following the murder of his father, the manga follows the storyline of a white lion prince called Kimba in the English dub version (I kid you not). He sees a vision of his mother in the clouds during a traumatic event but is later guided to safety in a land far from home. Here the cub learns key life lessons before returning home to his African jungle to follow in the steps of his father: to pursue a life of peace and humility between all creatures.

It’s almost laughable until you remember just how much money Disney makes – specifically, US$968.5 million on the 1994 Lion King blockbuster revenue alone – and the people who have lost out on their share.

But the new live action adaptation peaked international interest when Beyoncé was cast as Nala and Donald Glover as Simba. It seemed to right the wrongdoings of its animated predecessor, which whitewashed almost all of its main characters.

On 8th July the official (almost) cast photo was released, centred on Beyoncé with Donald Glover, Florence Kasumba, JD McCrary, Seth Rogen, Shahadi Wright Joseph, and Billy Eichner to the left and to the right the supreme Alfre Woodard, Chiwetel Ejiofor, John Oliver, Keegan Michael Key, and Eric André. Although James Earl Jones, the original Mufasa who is casted for the live action feature as well, is notably missing and was also absent from the individual cast photos released on 2 July by Disney.

Seeing the cast together it’s hard not to get excited from all that black excellence. And it seemingly just gets better once you see the track list of The Lion King: The Gift, a new album executive produced by Beyoncé.

It stars herself amongst some of the African nation’s biggest contemporary artists from Tiwa Savage, WizKid, Mr Eazi and Burna Boy – this stands in stark contrast to the 1994 version’s Elton John musical influence. But it has also received criticism for focusing too heavily on Nigerian artists despite the film’s strong South African musical heritage, stemming from the legendary work of Lebo M.’s musical advisor, composer and performer roles in the original film, to its Kenya-inspired setting.

I can’t help but think the diverse casting is more so influenced by the hypervisibility around the film, where there’s a heightened expectancy to see an appropriate casting for the African setting, so it would be a big flop to not have this ethnic diversity reflected, than Disney understanding where they previously went wrong.

But how can you be expected to judge a movie you have yet to see? We must look to the past for clarity – and Disney’s history with the African people is messy.

“At a time when intellectual property rights for black South Africans were slim to none, Solomon Linda died in poverty by 1962”

Imagine seeing your work in a production that has made just under US$8.1 billion and not receiving a dime, let alone an appropriate credit – that’s exactly what happened to South African musician Solomon Linda. In May 2019 Netflix released a new documentary ReMastered: The Lion’s Share, spear-headed by South African music journalist Rian Malan. It centres on Solomon Linda, who gave us the iconic song Mbube (‘Lion’ in Zulu) alongside his singing group the Evening Birds, which was later adapted to the famous The Lion Sleeps Tonight, and how him and his family have been exploited since by large media companies and Western artists.

Linda apparently sold his song, written in 1939, for less than 2 dollars to South African recording company Gallo Records during the Apartheid, at a time when intellectual property rights for black South Africans were slim to none. He subsequently died in poverty by 1962. Having personally initially received no royalties despite its international success with multiple renditions, his exploitation is most notably dealt by Disney’s The Lion King.

As outlined in the Netflix documentary, the song found its way across the Atlantic in the hands of folk music “revivalist” Pete Seeger and the Weavers, who released the rendition known as Wimoweh in 1957 under recording company Folkways. Before playing the song to a New York audience, he explains: “the following record we learnt off a phonograph record from South Africa … we wrote out the parts and at the end of it we found it was all in one word, and that word [Mbube] is in the Zulu language. A missionary told us it means ‘a lion’, whatever that means.”

More interested in the significance of the “lion” meaning, their rendition was later adapted by George David Weiss for the Tokens. He added the lyrics famously known in The Lion Sleeps Tonight, which was later used in Disney’s The Lion King.

And it is this traverse series of adaptations, based off the Weaver’s initial perception they had adapted a traditional Zulu song that held no intellectual property, that led to further copyrights being made without the link to Mbube. This subsequently meant Linda and his surviving family of four daughters initially received very little royalties for the Mbube renditions.

It’s worth noting, that once Seeger was made aware that the song they once thought to be a traditional Zulu song in fact held intellectual property rights, in the early 1950s he apparently sent a US$1000 cheque specifically to Linda, with the request to Folkways recording company to pay his future share of author earnings to him also. In Malan’s Year 2000 Rolling Stones article In the Jungle: How American music legends made millions off the work of a Zulu tribesman who died a pauper, Seeger is said to have recalled that “originally they were going to send the royalties to Gallo but I said, ‘Don’t do that, because Linda won’t get a penny’.”

But whether this was followed up in full has yet to be confirmed, with Malan writing later in the same Rolling Stones article: “Linda’s family maintains that the money only arrived years later, and even then, it was nothing like the full writer’s share Seeger was hoping to bestow.”

It’s these kind of back and forths that rock you throughout the documentary, as you see the triumphs and losses the family undergoes on their journey for fair compensation. It closes with a statement that the sisters receive the same amount of royalties from Mbube and Wimoweh sales but no longer receive royalties from The Lion Sleeps Tonight after a controversial undisclosed financial settlement with Disney.

When the Lion King was originally released it credited The Lion Sleeps Tonight to George Weiss, Hugo Peretti, and Luigi Creatore, with a mere mention of “based on a song by Solomon Linda and Paul Campbell” – Paul Campbell being a pseudonym for The Weavers.

“If you find yourself at the end of the film, don’t gather up your stuff and exit with the masses. Sit until the end, take in those quiet moments”

As the cinema screen emptied at the European Premiere last Sunday, I waited anxiously to see if Disney would dishonour the South African once again. Despite the whirlwind series of exploitation they have left in their wake with the Lion King, it was with a deep sigh when I read Solomon Linda’s name appropriately credited for the first time under both The Lion Sleeps Tonight and – most importantly – the creator of Mbube.

The significance of Mbube being credited means that Solomon Linda’s daughters could possibly claim royalties for the 2019 live-action remake.

It is almost inevitable that people will continue to buy tickets to watch The Lion King, generating even more obscene amounts of money for Disney regardless of its troubled history. But if you find yourself at the end of the film, don’t gather up your stuff and exit with the masses. Sit until the end, take in those quiet moments alone, and wait until Solomon Linda’s name appears across the screen. Take in that moment to remember his name, so him and all the people who have come before us, who hummed so we can roar, will not be forgotten.