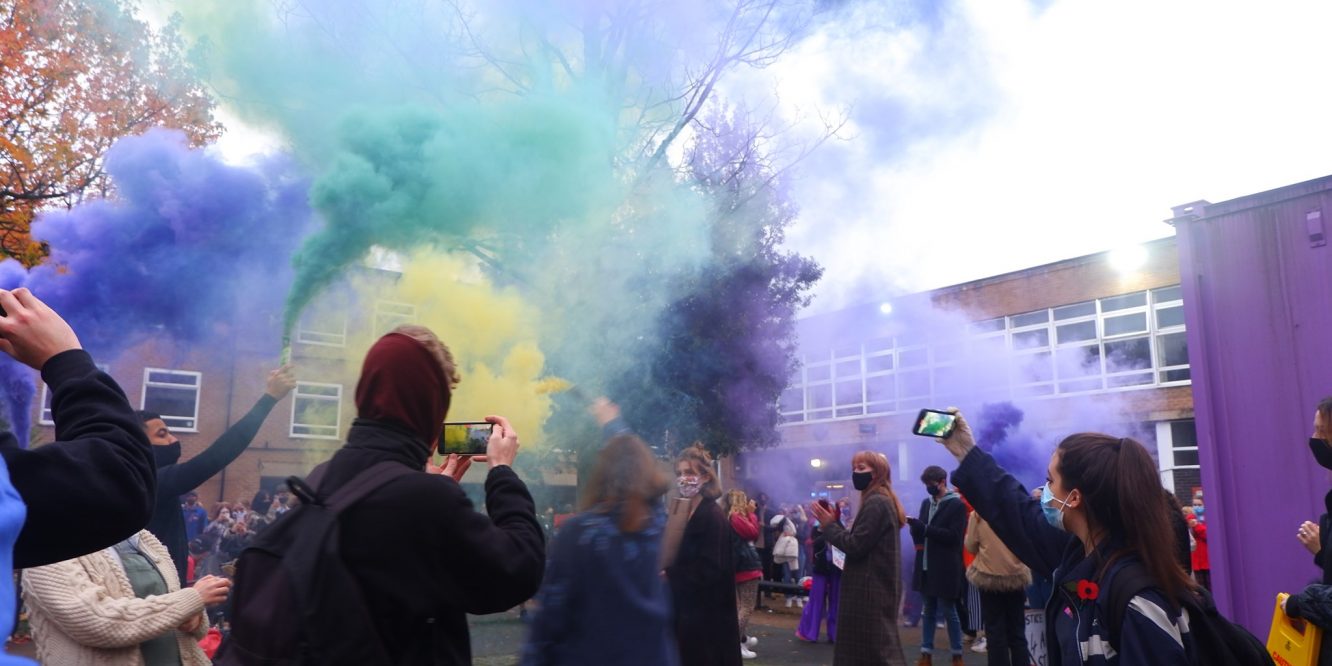 Denied of crucial support and crippled with unfair costs, students up and down the country are calling for change.

This article contains references to domestic violence, sexual assault and harassment, as do many of its outbound links.

When COVID-19 first hit, universities could have been forgiven for erratic responses to what was an unprecedented situation. The move to online learning was abrupt and destructive in many ways, but it also offered new ways of working. So, with a new academic year upcoming and after a month of #EatOutToHelpOut, students were encouraged to migrate across the country (and the world) for a blended-learning approach. It offered the potential of a worthwhile learning experience.

For many first-year students, this academic year follows a horrific summer of the A Level results controversy, which saw 39% of student results lowered by at least one grade, before an abrupt U-turn reinstated predicted grades. Then the COVID spike predictions made by student unions, such as the University & College Union (UCU), from as early as August started to come to fruition. Two weeks in, University of Manchester saw the highest affected student rate per capita, as reported by the Guardian.

The situation was exacerbated by universities failing to uphold the promises made to students prior to their return. Blended-learning swiftly becoming online-only tuition, the failure to offer regimented health and safety procedures, and a lack of wellbeing support services suitable for the extreme circumstances contributed to a perfect storm of unmet expectations.

The disparity between the level of education promised and the 2020 reality has led to calls for tuition fees to be either reimbursed completely or lowered, until online-only teaching ends. Petitions such as Georgia Hendersons’ garnered over 100,000 signatures; a subsequent debate was led by Labour (Co-op) MP Chris Evans on Nov. 16 with the Parliament Petitions Committee.

#StudentsDeserveBetter is another example, led by the National Union of Students (NUS) in coalition with different student groups across the country. “Students at the margins have been heavily impacted by the digital divide,” explains NUS President, Larissa Kennedy. This campaign aims to build a new strategy for education, and move towards free, democratised, decolonised education.

Here, five students from around the country tell me about life in higher education during a global pandemic.

“As a first-year student living in the Owens Park halls within Fallowfield, infamously dubbed by fellow students as ‘HMP Fallowfield’, I’m appalled by the lack of maintenance in an accommodation that is already over-priced. We have a silverfish problem and many of my friends have had broken fridges and showers since day one that haven’t been fixed.”

“Each week something changes in the news which impacts our lives. The University of Manchester (UoM) has gained notoriety recently, from unnotified fencing around student accommodation overnight to the racially-aggravated assault of a UoM student by campus security guards. To say it has failed those in its duty of care would be a grievous understatement. So, alongside the student organisation S.A.F.E.R [Student Action For a Fair and Educated Response], I am campaigning for the University to create a non-disadvantage policy among our various other demands. We are calling for a mental health support plan specific to the current climate.”

“The promise of blended-learning made moving to Bristol seem like the obvious choice. But it is far from what I imagined, so I became a member of the @rentstrikebris group at University of Bristol. With over 1,400 UoB students rent striking, I hope this forces the University to recognise the financial pressures young people are facing.”

“For me, it’s about even more than the money – it’s also the severe impact the current climate is having on our wellbeing. After testing positive, neither myself or my 11 housemates were contacted by the University. The lack of mental health provisions is especially concerning for a University which saw 13 students die from suspected suicides within a year and a half. So, considering its poor mental health record, it needs to up its game.”

“In defiance of Chancellor Rishi Sunak’s suggestions for creatives to ‘retrain’* for new jobs, I started my first-year in Fine Art in Cardiff. I was initially lured by the facilities and resources this course had to offer, but the move to predominantly online has been especially difficult and hasn’t lived up to my expectations. Although I knew from the start it would mostly be online, the lack of practical creating is really getting me jaded.”

“Described as a BA course where students can gain hands-on experience in practical studio sessions and workshops, we are ironically now only allowed into the studios once every two weeks. I feel like this is worse than not being allowed in. It’s like a tease of making stuff.”

*On Oct. 6, ITV News Politics tweeted “@RishiSunak suggests musicians and others in the arts should retrain and find other jobs.” Sunak and his office disputed the claim as a comment about general employment, not specifically about the music or arts sectors. ITV has since apologised.

“We were told by the University of Edinburgh, ‘if you can be in Edinburgh, you should be’, like many other institutions who encouraged students to return under the guise of a hybrid model. But I was unconvinced and suspected that this was just a translation for content being delivered almost completely online – and I was right! Instead, I chose to do my fourth-year in Neuroscience from home.”

“Despite currently being COVID-19 positive, I still count myself as one of the lucky ones because my symptoms haven’t been overwhelmingly awful. But the combination of not having a clear disclosure procedure for students testing positive and the pressure of group projects has prevented me from gaining the support I need at this time, to the point where I don’t even feel like telling them will make a difference.”

“I’m a big advocate for the Student Union’s Against Sexual Violence (AVS) campaign. With domestic abuse-related calls to police every 30 seconds in the first seven weeks of the first lockdown, Goldsmiths’ retraction of its commitment to supporting the ASV project comes at an especially detrimental time. Since having to come to terms with my own experience of being a victim of sexual violence, it shocks me that a university would reduce an incredibly important student service during a pandemic.”

“By significantly reducing the funding available, this limits the SU’s capacity to offer crucial support to students who are in isolation and possibly living in dangerous situations.This retraction is both short-sighted and careless, and I feel more noise around it is vital in forcing Goldsmith to reverse their decision. As sexual violence doesn’t stop during a pandemic, neither should the funding to fight it.”

Some names have been changed to protect the individual’s identity